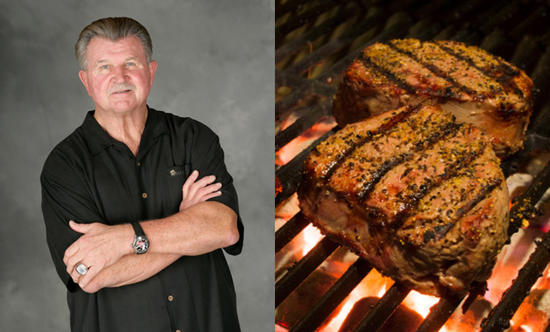 Up In My Grill | Coach Mike Ditka

Da Coach on his passions for meat, football, and the beautiful relationship between the two.

Mike Ditka is a man of simple needs. Despite his amazing career that includes prestigious titles such as “Pro Football Hall of Fame player” and “winning coach of the Super Bowl,” all it takes to make Da Coach happy is a little football and a lot of meat.

Despite his affinity for pigskin, Iron Mike can’t pass up a rib eye. He owns four steakhouses across the U.S. and own line of premium meats. On top of that, he also has his own line of wines inspired by his career as player, coach, and hall of fame inductee.

But even with a legion of fans eating his chops, drinking his grapes, and listening to his advice on Sunday NFL Countdown and Monday Night Countdown, there are few places this coach can be in complete control. Which is why Da Coach loves the chance to sear his own meat over an open flame. Check out how Mike Ditka coaches his steaks into submission on the grill.

Guy Gourmet (GG): What got you into grilling?
Mike Ditka (MD): I’m 74 years old. I’ve been grilling since I’ve been in my 20s. You want to eat; you gotta cook it, you know? You don’t have a lot of options. You have a piece of meat … what are you gonna do with it? You gonna put it in the oven? I don’t think so. The main way you’re gonna cook a piece of meat is on the grill.

GG: How often do you grill?
MD: I live in a condominium in Chicago so I don’t grill there, there’s no way to city grill. But I grill a lot in Michigan and Florida, so when I’m there I grill about four days a week. I’ve got an outside grill on my patio [in Florida] and I use gas. Most of what we do are steaks, maybe once in a while a pork chop or some chicken, but mostly steaks.

GG: Ever find yourself sideline coaching when someone else is behind the flames?
MD: No. You don’t do that stuff. I don’t play coach. Who ever does it, does it.

GG: Favorite meal to grill?
MD: Usually a strip. Maybe a rib eye, but mostly a strip. I love asparagus, I love broccoli, I love carrots. I love it all. We do the asparagus on the grill. I don’t like to mess with my meat much. Just pepper. And I like steak without sauce so I don’t do a lot with it. Just pepper, no salt. When it’s the temperature you want the meat—it’s done.

GG: Any tips on grilling?
MD: Tips on grilling? You get the meat, you cut it, and you put it on the grill. I’m not an expert at it you know. I think people who do it right it’s either about the seasoning and how you like your meat to get done. I like mine medium-rare to the rare side. It’s not a complicated thing.

GG: What tools do you use?
MD: What do you mean? You have a fork. You have a spatula. You have the little tool kit. Every body has a kit. How long is this going to take?

GG: Any grilling pet peeves?
MD: Overcooked meat. A well-done steak is about the worst thing you could have.

GG: Any Super Bowl plans or predictions?
MD: I’ll be working the Super Bowl so I won’t be grilling and there won’t be steak. They only have crap up there. They have sodas and sandwiches. I really don’t care who wins. I really don’t. I’d like to see Peyton win, but if Seattle wins, it doesn’t matter. I’ll be back in Florida by then. I’ll fly right back to Florida so if I get a steak it will be on my grill there.