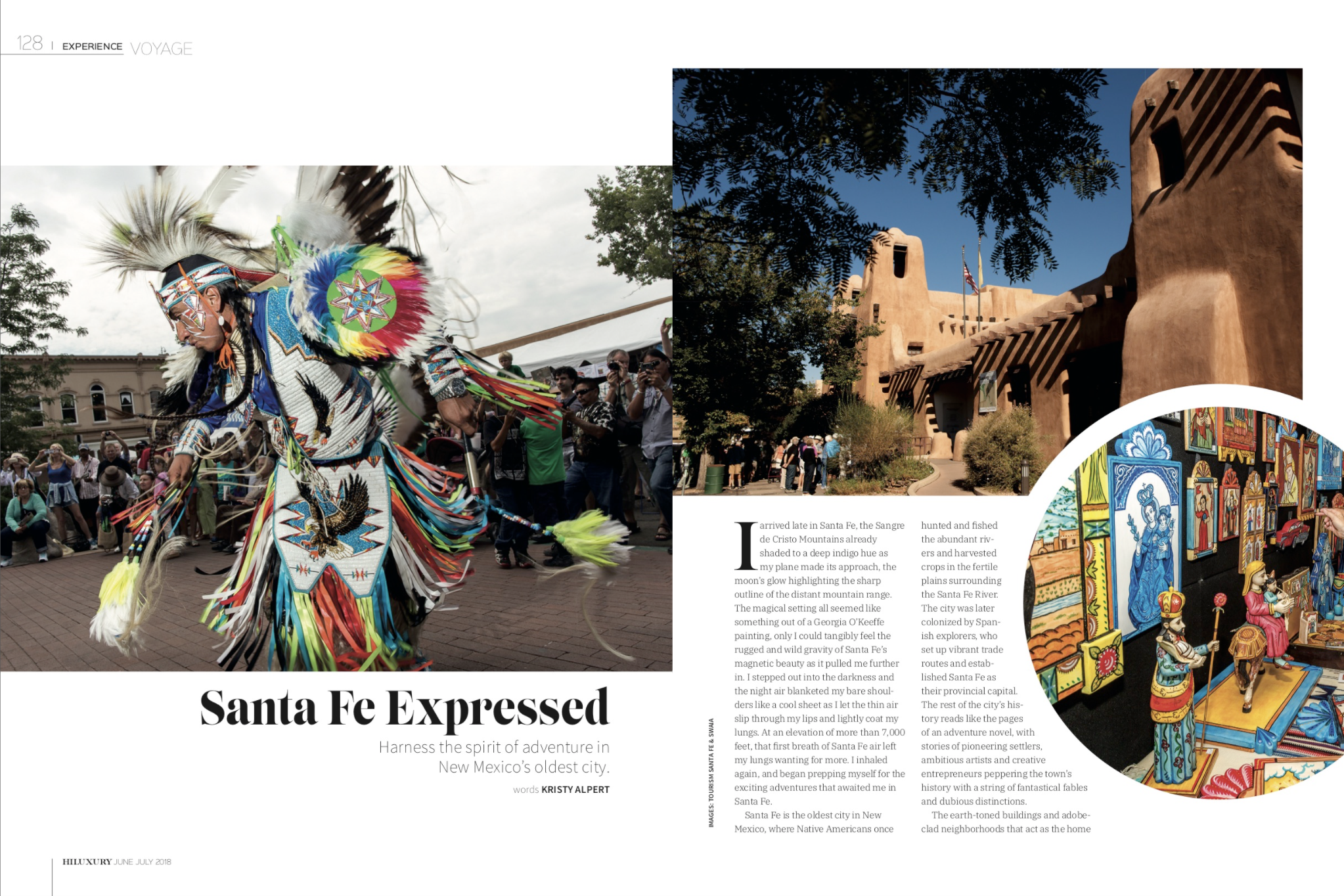 I arrived late in Santa Fe, the Sangre de Cristo Mountains already shaded to a deep indigo hue as my plane made its approach, the moon’s glow highlighting the sharp outline of the distant mountain range. The magical setting all seemed like something out of a Georgia O’Keeffe painting, only I could tangibly feel the rugged and wild gravity of Santa Fe’s magnetic beauty as it pulled me further in. I stepped out into the darkness and the night air blanketed my bare shoulders like a cool sheet as I let the thin air slip through my lips and lightly coat my lungs. At an elevation of more than 7,000 feet, that first breath of Santa Fe air left my lungs wanting for more. I inhaled again, and began prepping myself for the exciting adventures that awaited me in Santa Fe.

Santa Fe is the oldest city in New Mexico, where Native Americans once hunted and fished the abundant rivers and harvested crops in the fertile plains surrounding the Santa Fe River. The city was later colonized by Spanish explorers, who set up vibrant trade routes and established Santa Fe as their provincial capital. The rest of the city’s history reads like the pages of an adventure novel, with stories of pioneering settlers, ambitious artists and creative entrepreneurs peppering the town’s history with a string of fantastical fables and dubious distinctions.

The earth-toned buildings and adobe-clad neighborhoods that act as the home for the more than 80,000 residents hint at a not-too-distant past of determination and fortitude, but it’s the earthy air of adventure that permeates the streets and vibrant business of Santa Fe and make it such a captivating destination for exploring the high desert while soaking in the rich culinary and wellness scene the town is best known for today.

Just steps from Santa Fe’s top galleries, museums and restaurants in the historic plaza district, the Rosewood Inn of the Anasazi’s (rosewoodhotels.com) location is only a sparkle in the four-carat-diamond decision to stay at this chicly boutique hotel. The hushed tone of the potter’s pink adobe exterior act an understated welcome, as the earthy scent of piñon pines perfume the air and waft into the breezy lobby where a flagstone fireplace roars to a steady rhythm.

The interior of the Inn is a visual homage to the Anasazi Indians, also referred to as “the Ancient Ones,” who are best known for their elaborate cliff dwellings carved in to the landscape around the state. The walls of the Inn echo the sandstone structures as warm lighting sets an undertone of gratitude for town’s Pueblo history.

The design and decor of the Rosewood Inn of the Anasazi is Santa Fe style at its best, where handcrafted textiles and curated paintings and sculptures add to the Inn’s stunning collection of Native American, Hispanic and Anglo art. The Inn is petite by design, offering only 58 luxuriously appointed guest rooms outfitted with handcrafted wooden furniture and intricate Pendleton blankets accented by colorful pillows and natural fibers and fabrics.

The fitness center is open 24-hours a day and features state-of-the-art TechnoGym machines. However, the wellness focus of this Inn extends well past the walls of the fitness center as the hotel connects to many of the most popular jogging trails and biking paths that wind their way through town. Without a doubt the place to wind up at the end of a long day of adventuring and exploring around town is at the Anasazi Bar and Lounge for one of the Inn’s famous Silver Coin margaritas, a locally brewed beer, or a custom tasting of premium tequilas served with creative food pairings at the tequila table. The lounge features live entertainment every Saturday.

Santa Fe is home to more than 400 restaurants ranging from fast-casual restaurants and trendy food carts to James Beard-award winning chefs and fine dining options. New Mexican cuisine shines in this Southwestern town, where the official city question is, “red or green?” in reference to which type of chili you’d prefer with your meal. True locals know the only right answer to that question is one word: “Christmas,” where both red and green peppers end up on the plate.

Get a taste of Northern New Mexico at Tomasita’s (tomasitas.com), a local favorite for more than 40 years. Both their red and green chili has been awarded the best in the city numerous times, best topped on one of their blue corn enchiladas or handmade tamales, and the restaurant’s bar menu features some local New Mexican wines alongside an expansive menu of premium tequilas. Another local favorite is The Shed (sfshed. com), set in the original 1692 adobe home once occupied by the Spanish Royal Family, where lighter options like posole (a traditional Pueblo stew with Nixtamel corn) and healthy salads offset the decadent splurges on the menu like huevos rancheros and green chile burritos.

One of Santa Fe’s youngest chefs has transformed a hotel restaurant into the place to score a reservation, where the 38 tables at the Anasazi Restaurant are mainly split between locals and guests looking to be inspired by executive chef Edgar Beas’ creative menu. Chef Beas has earned his chops training alongside celebrated chef Martin Berasategui and spent time in a Michelin-starred kitchen before arriving at the Rosewood Inn of the Anasazi’s restaurant. His style highlights his flawless technique and presents local ingredients in an innovative way with creative but subtle flavor fusions and a presentation that is best described as art on a plate.

Another must visit while in town is Radish & Rye (radishandrye.com), where local ingredients aren’t just a part of the menu; they are the menu. The culinary team at this farm-inspired restaurant partners with local farmers and producers to create farm-fresh menus that

change with the season. Stand-out menu items include their board of local meats and cheeses with fresh pickles and mustard, their pan-fried trout with green chile corn bake and just about any of the selections from their expertly curated wine and bourbon menu.

Santa Fe is quickly brewing up a name for itself as a top destination for craft beer and craft coffee. Santa Fe’s own Iconik Coffee (iconikcoffee.com) can be found in shops and coffee houses around town, but the local roasters operate two locations that each feature a variety of light bites to enjoy with a cup of direct-trade and locally roasted coffee. The city’s handful of craft breweries are the hopping places to be after hours, where Duel Brewing’s (duelbrewing.com) creative line-up of live music, local talent, and even weekly beer + yoga events draw in a big crowd most nights. For more Santa Fe nightlife, head to Evangelo’s Cocktail Lounge (evangeloscocktaillounge.com) where at least five nights a week visitors and locals can hang out, dance, play pool, or just listen to live music until the wee hours of the morning.

Finding something to do in Santa Fe is as simple as walking out the front door, as this outdoor oasis offers everything from hiking, biking, golfing and more within the city limits. The city averages 325 days of sunshine each year, attracting photographers, artists and outdoor enthusiasts to the sundrenched landscapes of the area. Take to the trails along the Dale Ball Trail system (sfct.org/dale-ball-trails) or book it out of town with Santa Fe Mountain Adventures (santafemountainadventures.com) to explore the outskirts of Santa Fe.

The company specializes in authentic cultural experiences and outdoor adventures, and their private guided tour to the Bandelier National Monument is a must for hikers and culture lovers as it showcases the ancient cliff and cave dwellings with petroglyphs that reveal the rich culture of the native people.

Around town the city’s Plaza (santafe.org) is always bustling with something to do or see, including the New Mexico Museum of History (nmhistorymuseum.org), Shiprock Santa Fe (shiprocksantafe.com), the New Mexico Museum of Art (nmartmuseum.org), or the Georgia O’Keeffe Museum (okeeffemuseum.org). A short drive from the Plaza will bring visitors to one of Santa Fe’s most prized immersive experience, the eclectic Meow Wolf (meowwolf.com) art installation. Meow Wolf began in 2008 as an art collective and has grown to become one of the largest and most interactive art experiences in the country, where secret passages and portals guide guests through a fantastical realm of story and exploration.

There’s only one way to unwind at the end of the day in Santa Fe, and that’s at one of the city’s many spas. The Inn and Spa at Loretto (hotelloretto.com) is one of the top in the region, and offers a full range of massages, manicures and facials (in fact, one of the top experiences is their Peaceful Warrior Package for men that includes all three). The spa’s Native Reflections Ritual is a great immersion into the rich Native American culture of wellness as it begins with a sage clearing ritual and ends with a bath infused with sage oil followed by a sacred stone massage using house-made spirit blend massage oil.