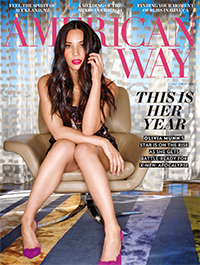 A Sense of Place

The Awatere Valley from above, where foragers hunted for wild game at Forage 2016. Photo by Kieran Scott

I feel the smooth pebbles shift and settle beneath me as I take one more step into the waters of the Wairau River. Farther upstream, the rapids rip past the bends and wildly carve their way through the valley, but the water calmly swirls in a pool around my ankles. The perfect spot, I was told, for landing a New Zealand trout.

I try to keep my focus on what lurks beneath the surface, but with each cast I feel my intention fade as I lose myself in the surreal landscape that slowly begins to change. As the sun rises above the hills, it casts a dewy glow on the pine trees towering above the river and sets the water on fire with glittering sparks of daylight. Never in my life have I seen trees that seemed so green or water that was so blue and pure. It’s like a scene straight out of a movie. Which, as it turns out, it is.

Although this isn’t the specific spot where Frodo schlepped his ring in the Lord of the Rings trilogy, where Aslan set up camp in the Chronicles of Narnia films or where Pete would eventually befriend his dragon in Pete’s Dragon, it’s clear why so many filmmakers have chosen to turn their cameras on New Zealand.

Despite being at the bottom of the map, New Zealand has long been at the top of my list, with an urge to explore Auckland and the country’s wine region of Marlborough.

I realize it’s a long way to travel for a glass of vino, but New Zealand wine is about experiencing the terroir and discovering vintages that can’t be found elsewhere. Which is also why I brought two suitcases — one to fill with their world-renowned sauvignon blanc — to the town of Blenheim.

Blenheim, deemed the Napa Valley of New Zealand, is a romantic South Island gem that is home to more than 20 wineries. The area averages more than 2,400 hours of sunshine per year — ideal for the grapes that grow here — and the day I arrive brilliantly contributes to the hourly sunshine count.

I check in to the Chateau Marlborough and decide to do a little sight-jogging around town, as the riverfront is teeming with runners, dog walkers and stroller pushers on the windy waterfront path. I follow signs past vineyards and orchards until I arrive at a grass landing strip where a few vintage aircraft that are parked in front of a hangar act as the winged welcome for the Omaka Aviation Heritage Centre.

After a “g’day” welcome, I discover that the museum houses one of the world’s largest private collections of WWI aircraft and rare memorabilia, loaned from organizations around the world, including the 14-18 Aviation Heritage Trust, chaired by film director and New Zealand native Sir Peter Jackson.

The museum is surprisingly empty despite the collection of rare items (the famous cross from the Red Baron’s triplane) and movie-quality dioramas housed within, and I have to think that if it were located in any city other than this tiny South Island town, the line would have been out the door.

While admiring the Caproni Ca.22, the only remaining monoplane model of its kind in the world, I hear an engine firing up outside. I find a man in a flight suit adjusting the dials of an antique biplane next to a sign advertising “Vintage Airplane Joyrides.”

It hadn’t been three hours after touching down in New Zealand, but I found myself once again taking off into the air, this time in a Boeing A75 biplane. A small windshield and a pair of vintage goggles are all that block the headwinds as we soar over the town below. I feel every crosswind as the plane teeters about the sky, but I remain unfazed, fixated on the farms, the fruitful valleys and the azure waves of Cloudy Bay, the body of water that shares the same name as the winery I would be visiting for the next few days.

Cloudy Bay Vineyards takes wine tasting to a whole new level. Their custom-made menu ranges from vineyard tours via helicopter to learning how to sail and celebrating with a glass of local sparkling wine. I sign up to take part in the grande dame of Cloudy Bay experiences: the “Forage” tour package.

The experience starts with four to 10 people; the local guides split up the groups and head out across Marlborough by plane, helicopter or car to forage for ingredients that will become the base for a wine-pairing dinner at the vineyard later that evening.

Although this slice of New Zealand has become famous as a fertile wine-growing region, with hundreds of thousands of vines trailing throughout the hills and valleys of Marlborough, less than 50 years ago, there was virtually not a grape to be found. Even now, so much of the country is still being discovered (and rediscovered), and a very real and very raw sense of new-world ingenuity and respect for the land lingers in the air.

I planned my visit to coincide with the week world-renowned chef and New Zealand native Ben Shewry is in town as the guest chef. I join a team of fishermen and plum pickers, successfully avoiding being recruited by the more-extreme hunting and scallop-diving teams, and head out the door with Cloudy Bay’s viticulturist, Jim White, urging us on: “In Marlborough, you eat like a king, but you have to do it yourself.”

That phrase replays in my head as I stand at the banks of the Wairau River, fighting back casting envy as Head Winemaker Tim Heath effortlessly casts his line through the hearty breeze. He lands his first fish of the day and begins telling me how the quiet burble of the river and the incredible natural beauty of the area are part of what drew him to his “office.”

An Australian by birth, Heath moved to Marlborough in 2005, just in time for harvest, and quickly adapted to the Kiwi pace and lifestyle.

“The essence of New Zealand’s sense of place is its incredible natural beauty, but it’s so much deeper than that,” he says. “There are these hidden places, places where you really have to work to get to; the places no one goes to except for a few people a year. They are so untouched, so pure, so beautiful. They actually give you the space to notice what is around you. The sense of isolation is breathtaking.”

There’s an underlying devotion to the land in Marlborough, dating back to the time when the Maori (the indigenous people of New Zealand) cultivated the land and would reserve the first fruits for the respective atua (god) and even throw back the first fish while saying a prayer of thanks for the bounty.

Unfortunately, I first hear about this after I catch and fillet the trout that bit my line, overly eager to present Chef Shewry with the roe I so manage to forage from the resolves. But any remorse fades as Chef Shewry presents us with his creation later that evening, an amuse-bouche that manages to do the fish justice by keeping the flavors pure and intact as a delicate smoked fillet appears on our plates, topped simply with my procured trout roe.

Although Shewry lives in Melbourne, where he heads up Attica, rated as one of the World’s 50 Best Restaurants by San Pellegrino, he grew up in New Zealand and stays true to his roots with his cooking.

“My father was a sheep-and-cattle farmer, so I’ve always felt the responsibility of showing appreciation for another person’s work,” he explains. “I’ve kind of always been inspired by Maori culture and their ways of cooking. If you’re going to kill something, if you’re going to take something to eat, you should do it justice by cooking it properly. To me that is the true flavor of New Zealand.

“New Zealanders are very humble people, so they’re always working hard to get better, to do better and to grow better. There’s sort of this quiet competitiveness in this country in a way. If you want to do something that’s great, you’d never actually tell people. You just try to do it every day and let your work do the talking. I think that’s the New Zealand way.”

The following day I have a stopover in Queens-town, the self-proclaimed “adventure capital of New Zealand.” The waterfront city has everything a thrill-seeker could want: paragliding, zip-lining, luging, whitewater rafting, canyoning, bungee jumping, etc., but I couldn’t pass up the chance to jump off the same bridge that gave birth to the bungee craze.

In November 1988, bungee pioneers AJ Hackett and Henry van Asch made history by opening the first commercially operated bungee site in the world, here at the Kawarau Gorge Suspension Bridge.

As I step out onto the ledge of the worn wooden bridge, 140 feet above the river below, my ankles are bound and the team gives a thumbs-up that I’m ready to go. The encouragement from the line of backpackers behind me trails off as I dive headfirst off the platform. I say (scream) a thank-you to Hackett and van Asch for making it happen.

I’m still buzzing from the excitement capital of New Zealand when I land in Auckland that evening, now excited to explore the town with a list of recommendations from the winemakers, chefs and residents I’ve met over the past few days.

Auckland was once viewed as a stopover city for the rest of New Zealand, but in recent years the city has been reinvigorated with a new spirit of originality and a refreshed sense of identity as people began moving back into the central city to be closer to work and school. The onslaught of urban dwellers spurred the desire for original shops and creative restaurants, and chefs like Al Brown were quick to meet that growing demand.

The city is now bursting with revitalized neighborhoods, lively night markets and a waterfront district perfect for ending the day with a glass of chardonnay and fresh oysters shucked just meters away from where they were harvested.

At the Depot Eatery, I take one last bite of hapuka belly and let the spice from the eggplant kasundi linger briefly before cooling my mouth with the crisp flavors of a chilled sauvignon blanc I recognize from the Marlborough region.

As the most populated town in the country, I find that Auckland still manages to boast the beautiful green space associated with New Zealand. The sunlight casts a warm glow over the rolling landscape as I stroll through Albert Park, ducking beneath the twisted branches of the park’s famous ombu trees. The park is already full of sunbathers entrenched in novels and couples giggling on the grassy grounds.

Within moments, I’m back in the urban sprawl of the city, walking past rows of Asian eateries and vintage stores on my way toward the neighborhood of Ponsonby. This inner-city suburb has become home to some of the best-kept secrets in Auckland, like the urban market Ponsonby Central and the rows of galleries from local artists and jewelry makers.

As I walk past the doorstep of the restaurant Orphans Kitchen, I catch glimpses of one of the chefs heading to the rooftop in a beekeeper’s uniform while another feeds a tiny pot of the homemade sourdough starter that is surely the source for the delicious smell of freshly baked bread that wafts along the main street.

I stop in for a slice of sourdough and a glass of chardonnay, and I can’t resist ordering New Zealand oysters before heading back to the hotel to pack up to fly home.